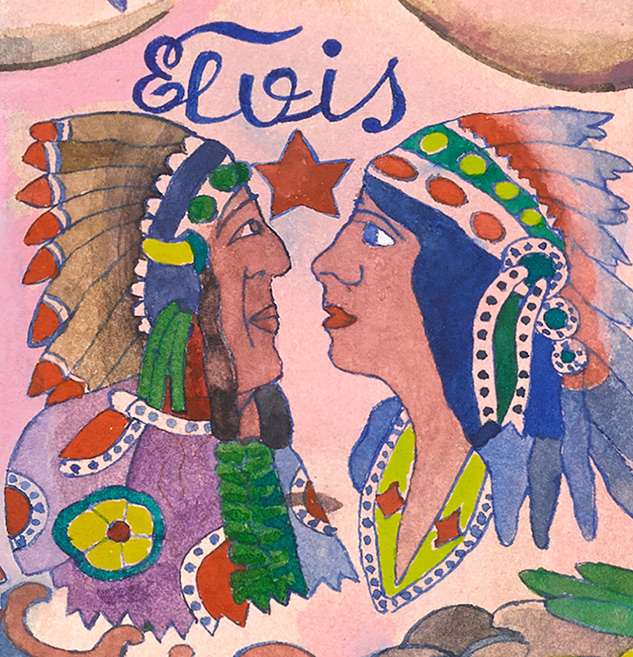 We spoke with Dan Faine, founder of Dark Matter Studio, about the making of Peter Blake’s Sex & Drugs & Rock & Roll print, which we co-published with the studio in 2018. Dan Faine is a Master Printmaker specialising in digital printmaking techniques and personally printed this edition.

You have a longstanding relationship with renowned British artist, Peter Blake. How did you first start working with him?

Dan: I first met Peter when I was a teenager working at Coriander Studio in the school holidays. Peter was in the process of making his original Alphabet Suite, published by Waddington Graphics in 1991. The combination of colourful graphics with photo-collage and ephemera was something I hadn’t seen before and found fascinating. I worked with Peter again at Coriander Studio throughout the 2000s, and when I founded Dark Matter Studio in 2012 we created our first publication with him, 3D Circus Collage.

How did the idea of Sex & Drugs & Rock & Roll as a print come about?

Dan: We’ve made a number of prints of tattooed people together, which began with a remake of Peter’s 1985 Tattooed Lady screenprint. We then made a boxed portfolio of Tattooed People prints. Sex & Drugs & Rock & Roll is the latest tattoo-based print and was inspired by a watercolour painting featured in Peter’s 2018 exhibition, A Life in Drawings and Watercolours, at Waddington Custot gallery. It’s a beautiful painting and so I was delighted when Peter invited me to make it as a limited edition.

What was the proofing process like when working with Peter?

Dan: The proofing was pretty extensive, in the sense that we tried many subtle colour changes, particularly with the vivid background blue, to arrive at a balance that does justice to the original painting. The final size was chosen because we wanted to make the image at a reasonable size, but without losing the sense of intimacy between the viewer and the subject.

There are some sceptics about digital prints as opposed to more traditional techniques such as etching and woodcut printing. Why did you decide to use the archival pigment printing technique to create Sex & Drugs?

Dan: I completely understand why people might prefer the idea of more traditional techniques; after all my background is in screen printing, however with the vastly increased colour range and level of detail you can achieve with archival digital printing, there is no better way of capturing the subtleties of a watercolour painting. Added to which the inks we use, being archival and heavily pigmented, have a much longer lifespan than other kinds of inks, meaning the prints will last much longer without fading.